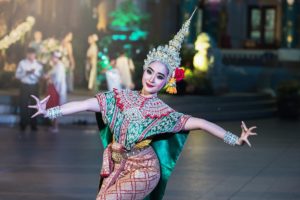 TRADITIONAL DANCING. Alorica, Duplo love to dance and to sing Zambian In every country dances, like other African dances, are sometimes made for special times like a marriage or when a child is born and sometimes they are danced just because people are very happy and enjoying themselves, in Zambia, different dances developed in different districts, but as people moved from one district to another, they often learned each other’s dances. These dances and songs, like traditional stories, often tell about the way people lived long ago, when life was very different 2. The Ngoma is named after a big ox-skin drum which was beaten to celebrate the return of the Ngoni warriors after their great battles with other tribes. There were two long lines of dancers, the women in front, the men behind. The men wore their war clothes and carried shields and spears. They jumped high into the air with their spears and shields held high to show how brave they were in battle, while the women sang a song admiring the brave warriors. Nowadays, the Ngoma is danced in many parts of Zambia and is a celebration of anything special – sometimes the end of harvest. or when an important visitor arrives, or on Independence Day. TRADITIONAL DANCING. TRADITIONAL DANCING.

TRADITIONAL DANCING. The Malaila was also a war dance which began in the Eastern Province but has now spread to the North. Long ago, it was danced when a chief who had been killed in battle was buried. But now that there are no more wars, rural people often dance the Malaila when a lion or leopard has been killed in the district. Many dances tell stories about hunting. They are danced with spears and guns and the dancers sing this kind of song: “I am going to join the hunters They have caught some game. The Vimbuza and Mabamba are special dances which were danced to chase away bad spirits which might cause sickness. The dancing was, and they are still exciting to watch and to dance fast and the music very loud so that the evil spirits would leave the In the Western Province, quite different dances were used. The dancers masks to rate the women and children, and they dressed in woven tromp reeds Nowadays, dancers called Chindwin and Nyakayoya for safety came in the same way and are paid with presents of food and money after as all over the world by tourists wing their skill people enjoy them now, and their carved masks are One of the most famous dances is the Ila Lion Dance it began tone when the people who lived in the Kafue plain had to spend a lot of their time hunting lions which often stole their cattle. Because the grass was all they often found it difficult to see the lions. The hunters used to make ang circle round the lion. Then the one who was to kill the lion moved out forwards with his spear ready, and the circle of hunters moved with him. When the lion was wounded, there was no way out for it, if it tried to escape. And the chief hunter had many strong spears around him Nowadays, one dancer is dressed as a lion, with fur round his neck, and a rail tied to his back. The other dancers circle slowly round him, a lancing and retreating with their spears held high. Sometimes, there is a second lion who helps the first one by chasing the hunters, and this makes the audience laugh. The drummers keep up a fierce, exciting rhythm and the women sing

TRADITIONAL DANCING. “He’s not a wild animal! He’s only a man dressed like an animal until the lion is killed, and the dancers circle round its dead body, shouting with excitement Perhaps there are children from different parts of Zambia in your school who know some other dances Ask them to teach you their dances, and then you can perhaps teach them the dances you know. TRADITIONAL DANCING.

(a) 70 million liters of water fall over the Victoria Falls,

(c) every minute. 2 700 million liters of water fall over the Victoria Falls

(b) The Kafue plains

Write these sentences in your exercise books, using the correct word.

Example: She has books in her desk (either, any, no)

Answer: She has no books in her desk