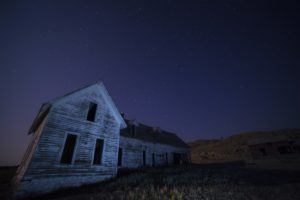 THE UNLUCKY HOUSE. Esther looked ahead at the small bush track. The farther the two girls drove along it the narrower and dustier it became. And the holes in the surface were making the car bounce like a ball. Jenny didn’t reply. She was busy thinking. Like Esther, her friend, she worked for Zambia Airways, flying to famous cities in other parts of the world. But when she had returned home to Lusaka last time, she had found a letter waiting for her from Mrs. Kambole, her former head teacher. Jenny had been afraid of Mrs. Kambole, but the letter sounded very friendly. Mrs. Kambole said she was very proud to hear that Jenny had got such a good job. She asked how Jenny was getting on and then suggested that Jenny should visit the school and talk to the girls about her job. She asked when Jenny would be in Lusaka again. Jenny had immediately written to say that she would be coming next Friday with her friend. Now she was beginning to wish she hadn’t come. She was very Kambole again nervous about making a speech and even more nervous about meeting Mis “Perhaps she’s become even fiercer during the last seven years,” she thought “She’ll be very annoyed it I don’t speak slowly and clearly, but I always speak much too quickly when I’m nervous My tongue seems to the itself into knots. Oh dear! I must have been mad to write.” “Jenny” yelled Esther. “Slow down or we shall take off like an aero plane on the next bump. You’re not really thinking about your driving at all, and I’m sure you’ve not heard a word I’ve been saying, where are we? I can’t see your school anywhere and we’ve been driving along this ‘Hell-Run’ for hours.” “I’m sorry, Esther,” said Jenny, looking ashamed. “I’ve been thinking about Mrs. Kambole and it’s made me feel nervous. “You’re driving makes me feel nervous,” replied Esther. “Are we on the right road? “Well, I think so,” said Jenny, “but remember that I haven’t been to the school for seven years. There should be a turning to it somewhere on the left. But I don’t remember the road being in such a bad state before.”

They drove on slowly while Jenny kept her eyes on the track and Esther looked out of the window. Suddenly, Esther said, “Look! We must be getting close to somewhere now. Look at all the ripe fruit on those trees. “Jenny stopped the car and they got out. Along the side of the track were rows of mango trees covered with ripe fruit. “This must be the school garden,” said Esther, but Jenny shook her head. “No, I don’t think so. The fruit looks lovely and ripe but look at the trees. No-one has been near them for years. They’ve become wild. “The mangoes may look ripe, but they aren’t sweet at all,” said Esther, throwing one away. “I’d like a cool drink. Let’s walk a little farther and see if there is a house nearby.” The two girls left the car and walked along the road. They turned a corner and found themselves standing in front of a huge old house, it was a tall, old house, completely surrounded by huge trees. Everything seemed so quiet that Jenny felt she ought to whisper. “Shall we go and have a look at it?” she said quietly. “Perhaps there’ll be someone at the back of the house.” The grass was tall and uncut where there had once been a garden. and as they walked up the steps to the SEC TOBOW had pushed through the She will come to purple flowers had been allowed to grow all over de and man bung down and covered the entrance like thick curt am This yard pushed their way through it and stood on the veranda Eyring to the darkness inside No-one has been here for years. wonder what happened

They tried to look into the house, but the windows with spiders’ webs and it was impossible to see anything. Then Este noticed the door. There was a key in the lock “Look, look Jenny!” she cried excitedly. The key’s still in the lock. Let’s go in and have a quick look round “y don’t think we should private house. I know it looks empty, but we might meet someone “Don’t be silly. There’s no-one here. And look She turned the handle. “The door wasn’t even locked “Well, I don’t like this house. There’s something stage Boor said Jenny. “I think it’s rather tightening But Esther had already disappeared inside “Oh dear,” thought Jenny, silly following her through the sun “We ought to have asked someone about this house front A huge spider fell on to her me and then summed 3 dan comer. But Jenny hardly noticed it. She was gazing soon shed the room she had just entered. It was full of furniture years. There was so much furniture that it was difficult to move as the room without bumping in a chair or se o telling over a little stool. There was thick dust on all the tumors the chairs and book shelves on the most curtains, and on the table. But it was the mobile astonished Jenny most. There were lies and plates on it just ss e family was shot most A fork down and sat dinner. One of the funks was even into on a plate in the middle of a small site of brown she green powder. Jenny moved forward and picked up the fork. It was thick with dust and when she moved the fork the pile of powder collapsed and floated away like dust.

How horrible!” thought Jenny. That must once have been food, this is the dining-room. I suppose. The people must have gone away in the middle of dinner. Something terrible must have happened.” Just then, she realized that Esther wasn’t with her in the dining room. “Esther, Esther,” she cried, “Where are you? I want to go back to the car! Esther!” But there was no reply. Jenny was beginning to feel really frightened. She rushed out of the dining-room but there was no-one the veranda. She rushed back into the dining-room and looked for another door. Perhaps there’s someone hiding in the house after all, someone who’s hiding from the police – a murderer perhaps!” she thought. “I’m coming. I’ll help you!” she yelled. “I’ll save you from any murderer Then, she saw a door at the far end of the dining-room. She rushed through it and found herself at the bottom of some stairs. Just then, Jenny heard a sound above her. *Esther, I’m coming,” she yelled again. The stairs were narrow and steep. but Jenny ran upstairs without caring how dirty or how scratched she got.

“I hope I’m not too late to rescue her,” she thought. Stairs She reached the top of the stairs and saw an open door in front of her. Someone was standing by the window leaning on a chest-of-drawers. But just then. Jenny slipped over a small brown object. The “object” didn’t like this at all. It jumped up terrified, gave Jenny a sharp bite on her ankle and ran away at great speed down the stairs. Jenny sat down at the top of the stairs and started to wail. A chest-of-drawers “Are you, all right?” asked a voice behind her. It was Esther “Esther, I am glad to see you,” said Jenny. “I’m sure we are being attacked by spirits. This is a horrible house, don’t be silly – it was only a mouse that bit you. It’s a very interesting house. I’ve been looking at some old photographs in that chest of drawers over there. All the drawers were locked but the keys were in a little pot on the top of the chest, so I soon opened them.” “You oughtn’t to have done that,” said Jenny who was feeling rather angry with Esther for making her so frightened. “If people lock up their drawers, it means they don’t want strangers looking into all their private things.”

A wardrobe Both girls were silent for a minute. “Something strange must have happened here, Esther,” said Jenny. nervously. “Let’s go, please, I don’t like this house.” calm. **Yes, it is like a museum.” Even Esther was beginning to sound less They went quickly down the stairs and through the silent, dusty dining-room. Both were glad when they got back to the car. After driving for five kilometers, Jenny saw a turning to the right. “We ought to have turned left along this road when we were coming.” she said. “I must have missed it, thinking about Mrs. Kambole. “Not long afterwards, they saw the buildings of the school ahead of them. One of the teachers welcomed them and took them to the head teacher’s house. She asked them if they would mind waiting a few minutes as Mrs. Kambole was just seeing some girls. Esther started to talk about thoughtfully, then she said, the old house and asked if she know anything about it. The teacher frowned “You must mean The Unlucky House that’s what the people is hare call it. Nobody dares to go near it now.” “But why?’ sold Esther and Jenny together “Surely you heard about it? Didn’t you read it in the newspapers?”

The girls explained that they were away from Lusaka a lot of the time “There was a European family living there,” said the teacher. “The husband had a big farm. Then two, or perhaps three years ago the Driver Ants came to this district. A huge army of them invaded the farm. They ate all the chickens in the form, leaving only a pile of feathers. It was evening. All the servants were terrified and ran away into the bush. The farmer and his family rushed into their car and drove off too. Next day, the servants, returning to the house, found the car. It had crashed into a trees and the whole family had been killed. Everyone was very sad because they had been such a nice family.” Jenny suddenly remembered something “But there was some old rotten food on the dining room table,” she said. “Why didn’t the Driver Ants eat that?” “Ah, that’s why the village people think the house is unlucky, The Driver Ants didn’t go there after all. They changed direction before they got to the house and went to the village instead. The family needn’t have left the house at all.” “But here’s Mrs. Kambole , Jenny was still thinking about the house. No wonder people didn’t like to go to that strange, sad place It was just as if the clothes and the furniture were still waiting for the family to return and use them. “Jennifer!” said a voice that she had heard before. “Still gazing into space, like you used to do at school?” It was Mrs. Kambole. “Oh dear,” thought Jenny, nervously. “She hasn’t changed at all!”

Jenny was very nervous about going back to her old school because she didn’t know the way to the school. she was nervous of meeting Mis Kambole again had to take her friend Esther with her didn’t know very much about the job When they walked along the track they found that (a) there was no one at the school it was already dark there was an old tall house there (0) lots of people were there The object that bit Jenny was (a) a mouse a spirit. an ant(a) In the photographs of the European family there was a father a mother, and two children (6) four children one child (0) three children The Driver Ants ate the European family (b) marched straight through the house ate all the food in the house. (d) timed away before they reached the house.