THE TOURIST CAPITAL OF ZAMBIA 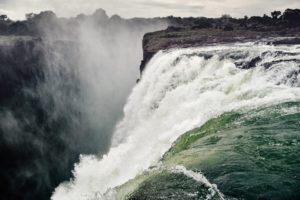 The noise was deafening, as the river crashed down into a deep gorge, which stretched away from them as far as they could see. For a few seconds, none of them could say a word, as they gazed at the wonderful water fall. Huge clouds of spray blew up from the gorge as the river suddenly dropped like an enormous white curtain. “It looks as if the water is boiling.” cried Zama, taking a few steps forward and stretching to see down into the gorge. “There must be quite a few liters down there,” he said, “Yes,” replied his father. “Every minute, 270 million liters of water pour over the falls.” Zama just couldn’t believe that so much water could be falling in one place. Mrs. Banda gave them their raincoats, and they put them on as they walked down the steep path. As they got nearer, the spray became heavier until it was just like rain. The path twisted and turned through the trees, and every few minutes they stopped to look through the trees at the water-fall. It was exciting but terrifying too, and even Zama said that he was feeling frightened. Soon, they reached a narrow iron bridge which crossed over a wide crack in the side of the gorge. Far below them, the river roared and crashed its way along its rocky bottom. Looking down, the children were astonished to see a rainbow shining in the spray. Lucky asked why the rainbow was shining beneath them instead of in the sky, and her father replied that the rays of light were coming through the spray, instead of through rain clouds.

They walked slowly and carefully across the wet slippery surface of the bridge, and up a steep path into the rain forest. It was dark under the tall trees and water splashed from every branch. A strong wind blew showers of water up into their faces from the gorge below. Zama wanted to look over the edge but his parents had forbidden him to leave the path. You might hurt yourself You might even fall in!” his mother shouted, terrified Zama had a belt on his raincoat and Mr. Banda held the belt and hauled him back on to the path. He held tightly on to Zama’s belt as they walked slowly along the edge. Soon, Mrs. Banda said that she was going back to the car. “I’m wet enough,” she said, “and frightened A belt enough for today!”

The others agreed, and soon they were drying in the hot sun, and talking about the wonderful thing they’d seen. “What are we doing now?” asked Lucky. Mr. Banda said that he was thinking of taking them for a journey along the river in the ‘Makumbi’, but first they would see what else they could find. As they drove along they were talking excitedly about going in this big boat, when suddenly Lucky shouted “Stop!” She had seen the ‘Maramba Cultural Village’ at the side of the road. Mr. Banda stopped, and they looked at the entrance to the village. The National Dancers were giving a display of traditional dancing. Luck said that she would like to see the dancing display, but Zama was afraid they might miss the boat. At last, Mr. and Mrs. Banda decided that they could watch the display of dancing first, and then go on the river later in the afternoon. “We’ll have time to do both,” they agreed. Mr. Banda bought tickets and they went through the entrance. Inside, there were several huts of different sizes. They found seats under some shady trees at one side of a big circle, where a lot of tourists were waiting to see the display. Opposite them, the drummers were already beginning to play.

The dancers came running out from their huts and danced in a big circle. The men were wearing bright yellow trousers and blue shirts decorated with yellow. The women wore beautiful dresses made of red and white material. The dresses had short sleeves and short, wide skirts. Over their skirts, some of the women A skirt had tied chikwembes. The yellow and blue suits of the men and the red and white skirts of the women made bright patterns as the dancers danced in the bright sunshine. The leader blew his whistle and the big circle changed into two smaller ones. The dancers sang as they moved faster and faster to the rhythm of the drums. The women stamped their feet and clouds of red dust rose as the men jumped high into the air with loud excited shouts. Lucky could hardly keep still as soon as this dance was finished, another team of dancers displayed a different dance. They were dressed as warriors and each carried a spear in one hand and a shield in the other. The shields were painted and decorated, and as the dancers moved into two long lines, each man held up his shield and raised his spear. The shields rose and fell as the dancers jumped high in the air and shouted.

The people clapped and shouted as the dance became more exciting and cameras came out as the tourists took photographs of the display. Dances from A shield every part of Zambia were displayed, but Lucky and Zama enjoyed the Makishi dances best of all. The dancers wore skirts of woven reeds, and round their legs were bells which made a noise as they danced. The bells were made of metal and each bell was tied to their legs with pieces of leather. On their heads were masks made of clay and wood and painted in bright colors. Each mask had two holes for the dancers to see through, and another hole for a mouth. Some of the masked dancers were very frightening; their fierce masks had a lot of string round the top which looked like hair. But Lucky and Zama were soon laughing again A mask when a dancer who was completely covered with a huge mask like a hyena appeared. Beneath the mask, they could see his feet moving quickly, while the enormous hyena mask turned heavily from side to side, catching in its mouth things that were thrown to it.

Then two tall poles were brought out and one of the dancers climbed up and danced on a rope stretched between the poles. There was not a sound in the audience as he moved along the high rope The bells around his ankles made the only sound that could be heard. Lucky was disappointed when at last the display was finished. But the Banda then walked round and watched the wood avers at work with sharp knives. The men were vying animals and masks out of wood Zama wanted to buy a small beautifully carved elephant and lucky chosen carved shield “Night!” said Mi Banda “We’ll be just in time to catch the boat to hurry up. It’s time to go Todorov