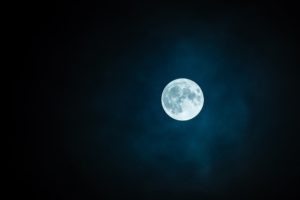 At night when you look up and see a beautiful new moon in a starry sky, do you think about the thousands of other people in the world who are looking at it at that moment? Or the millions of people since time began, who have spent long nights looking at the mysterious moon? . nowadays, we know quite a lot about it. Now we know more about it than has even been known before. And men have even walked on the surface of the moon. But, in spite of this, we don’t really know the moon well. It is a silent, mysterious planet that moves around the earth. We don’t know where it came from, what it is made of or how long it has been there. Long, long ago, it was even more mysterious to people than it is today. People thought that the earth was flat. When they looked up at the night  sky, they thought that they were looking at the roof of the earth. Unless it was cloudy, this roof was covered with a mysterious design of shiny silver dots, and often, there was one larger, brighter light moving across it. This was it. But the silver stars seemed to be always the same shape, its is shape was always changing. Sometimes, it was a narrow silver curve, sometimes it was a broad curve, and sometimes it was a solid silver circle. And, more mysterious still, sometimes it disappeared completely.

During the day, people could not look at the sky easily. They could not gaze at the sun because it shone too brightly and was too hot. It gave the earth light and heat, so many people worshipped the sun as god. They used to have temples built for the god, and priests to pray to him, but they could not gaze straight at the god’s face. If they tried, the burning heat blinded them. It is no wonder why that mankind found the sky at night so mysterious and magical. At night, it was cool and dark, and it was easy to gaze for hours at it and the stars. People gazed up into the sky above them and wondered and dreamed about it. Because it was bigger and brighter than the stars, they worshipped it just as they worshipped the sun.  but while the sun was a god, was usually a goddess. She had different names in different parts of the world, and in many places temples were built for her. In Greece she was called Selene, and in many parts of west Africa, she was called the goddess Mawu. But whatever her name was, she was usually thought of as the goodness of age and wisdom. The light and heat of the day are signs of strength, while the sun was worshipped because he was the strength  of the world, was worshipped because  she was the wisdom of the world.

While mankind worshipped the sun, and did not know very much about them, people were very superstitious. They became frightened and unhappy if the sun or moon disappeared when they ought to have been in the sky. When they saw a shadow move across the sun during the day, or over it at night, they thought that the sun god or the moon godness was very angry with them. then the temple priests had present brought to the temples for the god or goodness, and prayed to them to allow their light to shine again. And ideas about the sun god and goodness were not the only superstitions. There were other superstitious about huge monsters who came to swallow the sun and it. And when this happened, superstitious people prayed to the monster, asking him not to swallow the sun or it. Nowadays, very few people believe these superstitions. Most people know that when the sun and moon disappear it is because there has been an eclipse. There is an eclipse of the sun when the moon comes between the earth and the sun, while it is moving around the earth. And there is an eclipse of the moon when the earth’s shadow comes between the sun and the moon. When this happens, it cant reflect the sun’s rays. People used to hide themselves and pray during an eclipse, but now they get very excited about it and watch what is happening. Scientists study eclipses because they hope to learn from them more and more about the sun and the moon.