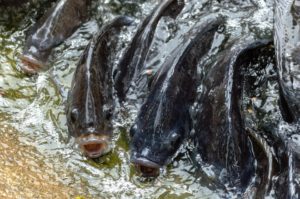 The Miracle Fish. In October, as usual, the people of kedul start to prepare their fields in readiness for the rainy season. They first clear the land by removing the weed and ploughing the soil for them to plant the seeds. This job, usual take the whole family to participate as most people in the area are substantial farmers. women spend most of their time working in the field while men tend to go for fishing and conducting business activities. School going children usual do their farming work during the weekends and during school holidays. Some families only have simple tools for cultivating such as a hoe for digging and an axe for cutting down trees or chopping wood. Usually, these people take a longer time working in the fields and their yield is not as much. Some families possess much advanced equipment for their farming such as tractors, irrigators, plough etc. this makes it easier for them to do their work and usually their yield is much more as compared to families who only have a hoe and an axe. Families with simple tools usual just cultivate maize, beans, pumpkins, sweet potatoes, groundnuts and cassava. Which families with complex tools usually cultivate more crops including rice, Irish potatoes, sunflower, cotton and much more for profitable crops. The Miracle Fish.

In the late 80s, kedul experienced a terrible drought which caused famine and death of over 330000 people. It is believed that the drought happened between 1856 to 1859, during the first world war era. The first year of the drought was much better because people had stocks from the previous year. However, in the second year, almost every household had no food. People started to feed on their pets, and anything edible they could find. Water was a big challenge too. Most of the water source were dry. People could travel very long distances just to have a sip of water. The weather was terrible as it was very hot. People could not farm, because there no rain and they did not have enough energy to carryout a lot of work because of shortage of resources. People started migrating to other places in search for greener pastures. Mostly, the young men, leaving behind the old, women and children. Then young men would travel for days without food and water, as a result, most of them did not make it to the promised land. Many were dying on their way. And if they human settled, the young men from kedul would strive to become a domestic work or looking after livestock. Over 50 per cent of young men who left kedul for greener pastures died on their way.

In the third and last year of the drought which was 1859, things become worst. People started feeding on their children. The situation in Kedul caught the attention of people around the neighboring villages. People of different religions started praying for the people of Kedul. They were five Christians from Meladune one of the neighboring who were very much concerned about the situation in Kedul. So they decided to pray and fast for Kedul for over two weeks. After their two weeks prayer and fasting, the five Christians, decided to visit Kedul. They had carried little food and water for their journey which took them a week. Though the situation was terrible in kedul, there was a family that was doing a little bit fine. That family was wealth and knowledge of how to preserve food and water, hence they were bye not badly affected they femine and drought as compared to other people in the village.

As they five Christians reached Kedul, they first approached the wealth family to ask for food and water. “We great you in the name of the Lord. We have travelled from Meladune to here, we are hungry and thirsty. May you kindly assist us with food and water please?”, the five Christian asked. “are you serious, don’t you know that we have drought for three years now? we don’t have any food and water, what has made you to travelled to Kedul, please go back to Meladune”, said the wife of the wealth man and the five Christians left. They traveled for about three hours and they found a plain, very dry and hot. They stooped there and started praying. Their prayers caught people’s attention, and people started gathering to watch what was happening. As they continued praying, they came a cold breeze with a sign of thunder in the sky. Within a short period of time, a lot more people came to watch the five Christians praying. “Mother, have you heard of what is happening now?”, said Martha, the daughter to the wealth man. “No”, replied the mother. “There are five people from Meladune who have come to give us rain, come and see”, said the daughter.

As the five Christians continued praying, it started to rain. The wife to the wealth man approached the cloud and discovered that, the five people whom she stung food are the ones who have brought rain in kedul. All she wanted to meet the five men again and invite them to her house to serve them food. But, unfortunately, she could not reach the five men, because she was obstructed by the multitude of people. The rains started pouring and people were very happy. “Hey look, I have seen a fish”, one boy shouted in the multitude, “I can see fish too” some other woman shouted. People started seeing fish falling from the sky. As the rain was pouring fish started coming out from the ground. People started drinking the rain water and catching fish. It was a glorious day in Kedul. The Miracle Fish.