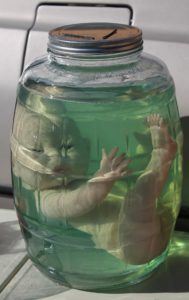 Every morning it was the same. Just as dawn came, a shadow could be seen moving quietly through the village. An old man, dressed in an old raincoat and carrying enormous buckets, walked slowly down to the water’s edge. He put the buckets down, lifted the bottom of his raincoat up and climbed into the canoe. Then he paddled to the middle of the lake and emptied the buckets into the water. He gazed at the water, smiling hopefully. Then he returned to the shore, climbed out and walked slowly back to his hut which was outside the village and surrounded by a high grass fence.

In the evening, still dressed in his long raincoat, Raincoat he returned to the water and paddled back to the middle of the lake. From the pocket of his raincoat he pulled a large fishing net. Then, for about an hour, he could be seen pulling up fish. He picked up a fish, looked closely at it and threw it back Each time he looked Arafa he was disappointed. At last he paddled back to the shore. With tears pouring down his face he walked back to his house. As he walked back with his shoulder bent, and his hands in his raincoat pockets, he talked quietly to himself People weren’t sure whether they heard properly but he seemed to say, sadly, Cabbage again tonight Oh I hate cabbage When will be able to have fish again? It will soon have been fifteen years since tasted fish and I do hate cabbage Oh dear” again, nobody knew But, what he meant when he said, “Cabbage At first, a good deal of time had been spent talking about him. But he never spoke to or answered anyone. No one dared to go to his hut inside the fancy, because at night a great deal of mysterious and Cabbage frightening noise came from the hut One evening, a group of boys was sitting by the lake, when they saw the old man. “Soon he will have been doing that for ten years,” said one “And we still don’t know what he’s doing “Let’s go and see for ourselves,” suggested another “Who will go?” asked the boys. “It’s a terrible rack.” “There are six of us,” said Larson, the leader “Here are six a talk, two long stalks and tour small stalks I’ll put the stalks under this piece of cloth. We each pick up a stalk and whoever picks up the two long stalks will go and find out for us tonight.”

And so, the two unlucky representatives, Larson and Mueller, were appointed. Late that night, two small shadows knelt in the darkness outside the fence. Strange gurgling sounds came from inside, as I a stream was gurgling and Stake Splashing inside the fence. “Look and see what that gurgling noise is,” whispered Mueller, who was very frightened. “No. Find out for yourself.” replied Larson who wasn’t much braver, and who couldn’t imagine what could be causing the gurgling “Let’s go then,” said Mueller, pushing Laban through the entrance and holding tightly to his sleeve. What tests does he mean?” whispered Mueller. “How can I guess what tests he means?” replied Larson, who was furious that they had been caught. “Ask him for yourself” Perhaps he’s drunk,” whispered Mueller, “or a murderer or a “Ha! You’d like to find out what I’m testing, wouldn’t you?” laughed the old man. “But I will certainly never tell you. Never! Never!” “Tell us what?” interrupted Larson. “About the new substance I’m testing – it has a special property. A property which no one else has discovered and a property which will change life under water forever!” “What property is that?” asked Larson, trying to encourage the man to speak “It’s a secret substance that has the property of being able to make fish with no bones … Oh no” wailed the old man when he realized what he had done. “Oh no! I didn’t mean to tell you! I meant to keep it a secret. I’ve been very careful to keep my secret and I meant to tell no one.

The old man rushed around the room, furious with himself, acting as if the end of the world had come. Then, suddenly, he collapsed exhausted on the floor and cried and cried. “What do you think he means to do with us?” asked Mueller. “We have been sitting here for an hour and I want to go home. “Just wait,” replied Larson. “Look at the poor old man. I’m sure he’s not bad.” The old man’s shoulders shook, and he almost choked as he cried. “Don’t cry, old man,” said Larson. “You’ll choke yourself. Why do you want fish with no bones?” “Well,” he said. “When I was young, I used to eat a great deal of fish. But whenever I eat fish, a bone sticks in my throat and! choke. Once I nearly choked to death. Then I had a dream of eating fish without choking. If I could make fish without bones, I would be happy I always eat cabbage because it has no bones, but I don’t like cabbage. “By the end of next morning, I’ll have been working for ten years on testing different substances to find something to dissolve fish bones without dissolving the fish itself. Each day I test the substance in the lake water, but each evening when I look at the fish, nothing has dissolved. I have found things that dissolve lead, I have found things that dissolve rock, but nothing seems to dissolve fish bones.” never be able to eat fish without bones. I shall have to begin all over again.” “Never mind,” said Larson. “We’ll help you. I’ve had a wonderful idea. And soon you will be able to eat fish without bones.” “In my opinion, that’s impossible,” said the old man. “But you can and so, the whole village came to help the old man to build another house inside the village. Then each evening, the village boys went to catch fish. Two of the boys had sharp knives. As the fish arrived, the two boys, who were very skilled, cut open the fish and lifted out the bones. Then, when there was enough, they went to the old man’s house. Then they sat and watched the smile on the old man’s face. “Oh,” he said. “What happiness! To think I have been searching for the secret for ten years and it was all so easy. Oh, wonderful. A whole plate of pure fish and no bones to choke me. Oh, I am so pleased! I shall never have to eat cabbage again!”