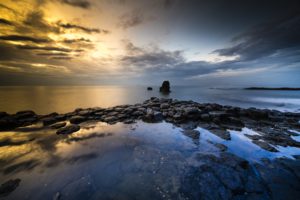 She was on her way back to Africa. Ever since she had been old enough to travel, she had made the same journey every year. But it was still an adventure to go back to the territory where she had been born, with her relations and friends. She had left the northern territories of Europe because the weather was getting cold there. Every day, she and her relations had found it more difficult to get enough food. Their journey had taken a long time, and she was hungry and tired. They had crossed the sandy desert territory of the Sahara and they had travelled over green, tropical forests and over high, snowy mountains. Now they were getting near their home territory in the middle of the great African continent. They were flying at a very high altitude, and they found it difficult to recognize the territory where they had made their colony the previous year. But she knew they must be getting near the colony, because she could see more and more birds on the ground and in the air,

They had many enemies, and the colony had been made on the island to Suddenly, the island was below them. As they flew slowly down towards it, she remembered that the previous year there had been no Serenity, even on the island. The river had flooded, her home had been washed away, and her mate and young ones had been drowned. This year, show wanted a home built in the security of the higher ground on the river bank the needs would hide her home and give her security from dangerous give them security from most of them. In a great silvery cloud, the birds landed on the swampy ground pes the ever They walked about chattering noisily. They were glad to reach the security of their colony, at last, and use their legs instead of their tire wings Ever since the migration began, many of the birds had neither rested near eaten They were tired and weak after their long journey, but they had reached home. animals

Like these birds, about half the birds in the world are migrating birds who travel enormous distances each year. They have two homes home in the northern hemisphere, and another in the southern hemisphere. Ever since people first studied the migration of birds, they have wondered how birds know exactly when to begin their journey from one hemisphere to the other. One Birds seem to have a sort of inner clock in their brains which tells them when to leave. As the days grow colder and shorter in one hemisphere, the birds leave for warmer climates across the Equator. Then, about half a year later, they return to the other hemisphere, where the days are getting longer. This gives them more and more time for catching insects. These flights are long and dangerous. But birds can choose the easiest routes and to survive with little rest and food. After they reach the colony, the bird spends several days eating and resting. Then the young male birds begin to choose their own territories, where they will soon build nests on Hemisphere breed. The tired little bird watched the young males quarrel noisily as they tried to find the best place. She noticed one who was defending his territory against a larger bird. The bigger bird landed on his ground, but the younger one flew at him furiously. He defended his territory with his beak and claws, fighting so fiercely that at last the big bird flew off to find another territory. Then he saw her and began to show off. He moved his wings slowly up and down, showing his new shiny feathers. He showed off his voice by singing as loudly and sweetly as he could. His showing off pleased her, and she began to advance slowly towards him.

He advanced a few steps and danced in a circle round her. They flew to a nearby bush, and then he advanced towards her again, carrying a small stick in his beak. To show that she wished to have him as her mate, she advanced towards him, and took the stick from his beak. They strutted up and down together. He strutted proudly round his territory and she followed. They danced and strutted and sang to let the whole colony know that they were mates. All around them the building of nests was beginning. They chose a small shallow hole in the swampy ground. In this shallow hole, their eggs would not roll and get broken. When the eggs hatched out, the tiny chicks would be safe in this hole. A nest in a shallow hole was greater security than a nest on flat, open ground. sure, to give Next, they had to get a pile of sticks. They found is difficult to find sticks, since few trees grew near the colony. But slowly, the pile grew larger. They piled one stick on top of the other inside the hole. Then, they collected the piles of soft grass and feathers and wove them into the pile of sticks. They wanted to make the nest as warm and comfortable as possible.

As soon as the nest was finished, she laid four smooth, stone-colored eggs in it. Each egg spotted with brown. would find it difficult to see the eggs among the pile of sticks and grass. Was Even the most powerful eyes Pile of sticks for nearly three weeks, the two birds never left their nest at the same time. Many dangers threatened the security of their eggs. At night, there was the threat from small animals, which were always threat. wandering around in search of food. Wild Always, as soon as the little bird saw their threatening eyes shining in the darkness, she jumped towards them, defending her nest with her sharp, cats were the worst curved beak. In the day-time, snakes and lizards often threatened the eggs, which were their favorite food. One day, she was swimming and feeding in the river while her mate was guarding the nest Suddenly, she heard a terrible Scream was a warning scream and it could only mean that one of the enemies had begun an invasion of their territory. She low quickly back and saw that a family of hungry lizards was invading their nest.

The invaders came from all directions. Her mate was trying to protect the rest from the invaders by rushing first to one side, then to the other. She dropped on to the head of the largest lizard who was leading the invasion ustic he was pulling an egg out of the nest, her claws sank into his head, and he had to let go of the ear to defend himself. In a few moments he was dud and she went to help her mate attack the others. A terrible light followed, but at last, they conquered the invaders. The invasion had failed, and the two birds pushed the egg back to the security of the nest. Peace returned to their territory Big birds of prey, like the eagles, sometimes preyed on eggs too, when they found it difficult to catch other kinds of living prey. If the birds saw the shadow of a bird of prey moving towards their nest. áll, hoping that the bird of prey would not notice completely them. At last, the eggs hatched out. Each of the eggs broke and a tiny yellow chick appeared. Now the parents’ work was even harder. The chicks were sure to need lots of food all day long.

Their mother sat on the nest, keeping the tiny chicks warm, while her mate kept flying to the river and back again, bringing insects and worms. When he was so tired that he found it difficult to fly, she always went to search for food while he rested on the nest. At last, the chicks were big enough to go to the river. They needed more and more food, and the big birds were glad when the chicks could get some of their food themselves. Ever since the eggs had been hatched, they had spent all their time catching food for their babies. The chicks soon learned to swim in the shallow water at the edge of the river. There had always been threats on land and in the air, but now there was a new enemy in the water as well. Whenever they went to the river, the birds wanted the chicks to keep close behind them for security. They knew that many small birds had met their death by wandering away alone.

One day, they saw some frogs hopping in and out of the water, and the last chick in the line decided to chase them He saw a crocodile slide towards him, but he did not know that a crocodile meant death. His mother saw the crocodile and screamed a warning, but it was too late to save the chick from death. Ever since this accident, the birds made sure that they watched the chicks every minute of each day. Soon their feathers were longer and darker, and their parents began to teach them to fly. They held fat insects in their beaks and flew slowly away from the nest. The young birds were hungry, and always ran after the insects. The parents kept the insects above them so that the little birds had to jump to get them. They soon found it less difficult to jump if they stretched their wings out to help themselves. They stretched their wings and flew after their parents. Stretching their long necks, they took the insects from their beaks. Soon they did not find it difficult to get into the air, and after several days, each of them could fly well.

The breadth of their wings was now almost the same breath as their parents’ wings. One day, the bravest one flew across the breadth of the river.  Soon the mother knew that they were safe in the air and she allowed them to fly far from the nest. They would now always find their way back safely. They flew to every part of the colony and could find all their own food. The older birds watched them. They were proud of their growing chicks and knew that they would soon be strong enough to join the flight to the northern hemisphere. At last, the great day came. From all over the colony. the birds gathered on the river bank. The younger ones chattered with excitement. The older ones lifted their heads and listened to the wind. They stretched their wings and flew slowly over the colony in a circle.

One by one, the other birds joined them until the sky seemed to be filled with a cloud of birds. Far below them they saw the river, twisting its way through the swampy territory which had been their home for half a year. Most of them would return the following year but now ahead of them was their long, exciting journey to the northern hemisphere. Up and up they went, until they could no longer see the river and the swamps, then they disappeared above the clouds. The great adventure of migration had begun again.