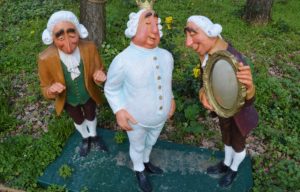 Many years ago, there was an Emperor who loved beautiful clothes, He was so interested in buying new clothes that every room was filled with his suits. He had suits to wear in the morning, suits for the afternoons and suits for the evenings, in the whole of the state, no one had more suits than the Emperor. He was not interested in his country but spent all his time and money choosing his suits One day, two strangers arrived. They said that they were able to weave special magic cloth, which could be seen only by clever people. Stupid people could not see it at all. The cloth became invisible when a stupid person looked at it. They offered to weave some for the Emperor. The Emperor thought this was a wonderful idea because sometimes he did find it difficult to decide who was stupid and who was clever. He would be very grateful to the Suit weavers for the magic cloth, you will not only know the stupid people, sir,” said the weavers, “you will also find it useful to know which of your officials is fit for his Job.” The Emperor was pleased. “Weave your magic cloth and make me a suit,” he ordered. “Then I’ll know that anyone who cannot see the suit is either stupid or unfit for his job. But the Emperor did not realize that the weavers were cheats. They cheated people by pretending to weave magic cloth. The Emperor gave the cheats a lot of money, and soon they were busy putting together their machinery for weaving in the market place. They cheated by telling the Emperor that they had bought the most expensive kind of thread. They pretended to have ought to bundle of silk thread and gold thread to weave beautiful patterns. They sat moving their hands as if they were holding the threads and they talked to each other about the wonderful patterns they were making with the shiny gold threads. Everyone came to see the weavers at work. Each person talked to his neighbor about the wonderful progress the cheats were making with their magic weaving, rather than let people think they were stupid. “What beautiful colors,” said one. Thread “And the patterns are wonderful,” said another.  But the Emperor was not a completely stupid man, and he was a little suspicious of the weavers. He wanted to see the magic cloth, but he was afraid to go himself. What a terrible thing it would be if he could not see the cloth! So, he sent his most important minister to the market place

‘The minister can’t be a stupid man,” thought the Emperor. “A minister will certainly be able to see the cloth.” The minister walked slowly round the weaving machinery. “Oh dear!” he thought. “I can see nothing at all! Can I be stupid? Am I unfit to be a minister?” So, he pretended to admire the cloth, rather than let the people think he was stupid “I have never seen such lovely colors,” he told the Emperor. “In my opinion, a suit made of this cloth will be really beautiful.” “I hope that the suit will have been finished in time for the parade next week,” the Emperor replied. Every year, there was a great parade through the city on the Emperor’s birthday, and the Emperor loved to show off his new clothes. He always walked at the front of the parade, followed by his ministers. Everyone in the parade wore their most beautiful clothes, and all the people had a holiday to watch the parade. A short time before the parade was going to take place, the Emperor sent a minister who belonged to a different party to see if the cloth was ready “He’s the representative of his party. It is important that both parties are fit for my government,” he thought So the minister from the other party hurried to the market place. Of course, he found no evidence of any weaving.

But when the cheats asked him if he admired their work, he decided to tell a lie rather than let people think he was stupid “It is the most beautiful cloth I’ve ever seen,” he said, “Will enough cloth have been woven in time to make the Emperor’s new suit for the parade” “The cloth will have been finished by tonight,” replied the cheats. “Ask the Emperor to come tomorrow to be measured for his suit.” When the Emperor arrived, the cheating weavers pretended to have the cloth ready to cut. be stupid! I can’t be fit to be Emperor.” **This is terrible” thought the Emperor. “I can’t see any cloth! I must but he pretended to admire the skill of the weavers rather than let people think he was unfit for his job. am pleased with your work,” he said. “I like the colors, and the pattern is beautiful. Can you finish the suit before the parade?” before the birthday parade “Certainly, sir,” the men interrupted. “It will have been finished long They measured him, and pretended to cut out pieces of cloth Then they pretended no sew the pieces together carefully First they sewed the sewing by moving their fingers like people do when they sew Jake and then they sewed the trousers They pretended that they were when the Emperor came to put on his new sunt, the men asked him to stand in front of ones motor. They helped him to take off his old suit and pretended to help him put on the new jacket and

The inkdot is little too short and tight said one. And they pretended to widen and loosen the jacket. The trousers are a little too long and wide,” said the other. And they pretended to shorten and tighten the trousers. The Emperor tilt very silly, standing in the market place, dressed only in his shirt. But he pretended to admire the new suit which the millers had made rather than let the people who were watching think him stupid. He thanked the two tailors, and the crowd whispered together What clever tailors they are Not only have they woven magic cloth, but they are good tailors’ tool Next day. an enormous crowd came to watch the Emperor’s birthday parade. Everyone was astonished to see him wearing only his shirt, but they pretended to admire his new suit. People stood on tiptoe to see his thing proudly in the front of the parade. Suddenly a little boy pushed his way through the crowd. He didn’t care what people thought. o funny he looks!” he shouted “He’s wearing only his the astonishes crowd que tuned. Each person was silent and tried to guess what his neighbor was thinking.

Gradually, everyone realized that they had been cheated because they were stupid enough to believe the tailors story of magic cloth being The Emperor’s face reddened, and he almost choked but he kept walking in the parade. Everyone pretended that they had not heard the Tale boys shout but everyone knew he was right No one else, in all that OTO had been breve enough to tell the truth.