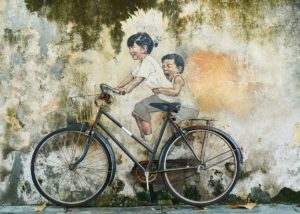 A message must reach kalumbi. A must get there today.  It will take a long time to reach time to reach him. His Village is far away. But the road to Kalumbi’s village is very rough, So a plane is no use to anyone. No runway is smooth enough. There are no rails so there is no train. There’s only a river after lots of rain. Fuel is needed for a heavy truck, and a car is no use, it will soon get stuck. A horse needs food. And a tsetse fly. Might bite the horse and the horse would die. No tar for a plane, no rails for a train, no road for a truck, A boat will get stuck. A tsetse fly and the horse will die. So, the only thing might be good, that needs no fuel and needs no food, it is a small machine, called an iron horse, I mean a bicycle, of course.

There must be millions of bicycles around the world today. In every town in every continent, hundreds of people use bicycles every day. Women and children in every continent use bicycles to go to work, to school and to the shops. Bicycles are especially useful in continents where road communications have not been developed. In continents like the continent of Africa, where, in every rainy season, roads become muddy streams, people would find life very difficult if there weren’t any bicycles.

But bicycles were at first only things for children to play with and it took more than a hundred years to invent the bicycle we have today. For many years a favorite play thing of rich children was a wooden

horse. Then out two hundred years ago a Frenchman built a wooden that was different. Instead of legs two wooden wheels were fixed on the horse’s body. the rider could only move the machine by putting his feet on the ground and pushing the ground. The body of the machine was made in one piece and so it could not be steered at all.

Then a German inventor saw the horse. “Mm”. he thought “if a handle could be fixed on to the horse, then the horse could be steered. I ‘ll try to fix a handle in front.” So a handle was fixed to the front and instead of the wooden body of the horse, a piece of iron, with a seat on it, was fixed to the wheels. The machine could now be steered, and it didn’t take very long for adults to begin to use this machine. Although it could still only be moved eleven kilometers in an hour, which was very fast in those days.

Travelers to France and Germany saw this machine and soon it was used in many countries. But several people believed that the design could be improved. First, a Scottish inventor designed some levers which could be fixed to the front wheel. The wheel could be turned by the rider when he pushed the levels backwards and forwards with his feet. Very soon afterwards, a French designer made a bicycle which could be moved in a completely different way. Instead of levels, he fixed pedals to the front wheel. Whenever the pedals moved, the bicycle moved, too. People today would think this bicycle was very funny. The rider had to stretch his legs out to reach the pedals on the front wheel. Of course, people in those days didn’t think it was funny because they had never known anything else. It must have been very funny too, to see a person going down a steep slope. The pedals couldn’t stop turning round and round and the rider had to take his feet off the pedals as they went round at a very great speed.

But it would not be very funny if the rider met anybody at the bottom of the hill because there was no way of stopping the bicycle. Visitors to France was this design and liked it. Very soon, bicycles become very popular in many countries. We might wonder why it was very popular, because it was very uncomfortable. It was so uncomfortable that it was called the Boneshaker. But you must remember that cars hadn’t been invented and travelers had to use wagons pulled by horses. But now, bicycles had become safer. Brakes had been added to the back wheel. A small piece of solid rubber was fixed on to a piece of iron. A string was tied to this and to the handler bars so that it could be pulled easily. After the Boneshaker came the Penny-Farthing. This was a machine which must have looked even funnier because it had a huge front wheel and a tiny back wheel. It was given this name because the penny was a big coin and the farthing was a small coin like the ngwee. Bicycle makers designed wheels like this so that bicycles could be easier to ride. The bigger the front wheel, the easier the bicycle was to pedal. The wheels of the Penny-Farthing bicycle were now made of wood. Solid rubber tyres were used, too. Until now, the wooden wheels of a bicycle had a thin piece of iron round them. But solid rubber was now used for tyres and the bicycle was much quieter and more comfortable. But it was still much more difficult to ride than a modern bicycle.

At that time, the frame was made of solid steel. Although steel is very strong, it is also very heavy. For a long time, the makers of bicycles used all kinds of different materials instead of steel. Bamboo and wood were not as heavy as solid steel, but they were no use because they were not strong enough. It took a long time before something else could be used instead of steel but, when industrial development began, an answer was found. Steel tubes were been made in factories. Although they were just as strong as solid steel, they were not as heavy as solid steel. From then on, bicycle frames were always made from steel tubes. Now that light steel tubes were used, bicycles became very popular. Bicycles had never been light enough for women to ride, but because light steel was now used, many women began to ride. The bicycle was strong enough for men and light enough for women and children.

Then the manager of a bicycle-making company inverted a bicycle which had pedals fixed to the bottom of the frame between the two wheels and not to the front wheel. A chain went round the pedals to the back wheel. Now, because of this chain, the pedals turned the back wheel and left the front wheel free. It took someone else another ten years to build the Safety Bicycle which is the one we know today. It also had a chain which made riding easier and the wheels were now both the same size. With the chain and better brakes, the bicycle could be easily controlled even when going down a steep slope. Nobody worried about having a puncture in those days. It was impossible to have a puncture because the tyres were made of solid rubber.

In Ireland, there was a man who had to travel a lot on gravel roads, as he bumped along the rough road, he began to think. “ I’m sure wheels can be quieter and more comfortable than this. There must be some way they can be improved. I wonder if tyres could be filled with air. That might be better”. So he took a wheel from his son’s bicycle, fixed a rubber tube on it and filled the tube with air. First, he rolled the old solid rubber along the ground. It went a short way and fell over. Then he took the much lighter, air-filled tyre and did the same thing. It rolled right across his garden. This air-filled tyres and soon all bicycles used these tyres. Even when cars were inverted, hundreds of bicycles were still made. A bicycle can be used in many places where a car is no use. It is cheaper than a car. It needs no special roads, no fuel and no food, excerpt for a little oil every now and then. Now when you look at bicycle, which looks such a simple machine, perhaps you will remember that although it takes only one person to ride a bicycle, it took many men, many years to invent this machine.