WAMU LEARNS TO SEW FOR HIMSELF 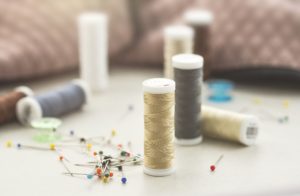 We came into school feeling very uncomfortable. Ever since his other had been in hospital, he had been wearing a suit without buttons. Every time button came off, he made do with pin. He always meant to sew on his buttons but there was never any time and he was not interested in sewing. This morning, the last button had disappeared from his trousers, and now they were held up by a piece of string. Whenever he stood up, the class laughed. He looked so funny, holding his trousers up with one hand, while he tried his best to answer the teacher’s questions. After school was finished, things worsened for Button Wamu. Each of the boys asked him if they could borrow his piece of string. “‘You must be stupid if you can’t sew on a button,” laughed the girls. By the time he got home, Wamu was so ashamed that he decided he needed to learn to sew for himself. He searched for a needle and thread. The only needle he could find had a very tiny eye, and he found it difficult to push the end of the thread through the eye of the needle. Either the thread or the needle slipped from his unskillful fingers every time he tried. But, at last, the needle and thread were ready. With his left hand, he held the button on the material while he pushed the needle up from the wrong side of the material. But the needle came through the material at the side of the button. He jumped with pain as the needle went into his finger instead of the Needle button. He tried again, and this time the needle came through the hole in the button.