1. iPad mini 6 tablet review..small in size, but the most important thing is what it can do! 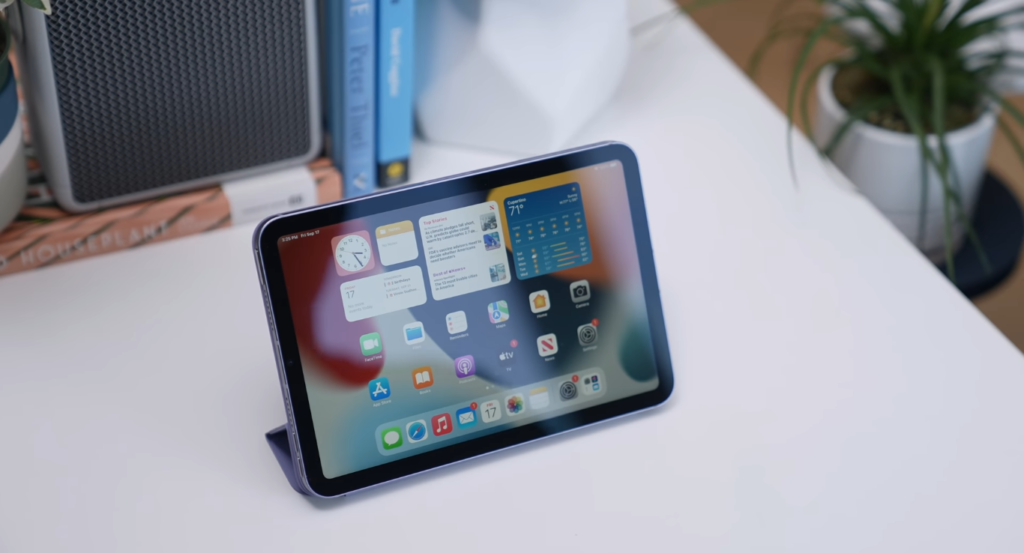 The iPad mini has always struggled with the problems of the middle son at home, never getting the attention that the cheaper regular iPad, nor the features that make it a full-fledged tablet like the larger, more expensive iPad Pro that is nearly able to replace MacBooks. But with the iPad Mini 6, it seems that Apple is trying to change the way users look at the Mini series, redesigning it to resemble the more luxurious iPad Pro, and also provided it with the A15 chip that works with the iPhone 13, increasing the screen size a bit and adding more new features such as support for the generation The second is from the “Apple Pencil” pen and Sub-6GH technology for fifth generation communications and other features.

the design
Apple changed the design of the iPad mini 6 to become more similar to the iPad Air 4 and iPhone 13 compared to the design of the fifth version, giving it flat side edges with the optical effects of brushed metal that give it a luxurious look and feel.

The first thing that will catch your eye when using the device for the first time is the edges of the screen that are somewhat wide and equal in length on all four sides, especially if you compare it with the edges of the iPhone, which are almost non-existent; But after a short period of use, you will find that the width of the edges is perfectly ideal to hold the phone comfortably without any accidental touching of the screen.

The size of the device is small in all respects, with dimensions of 195.4 x 134.8, it is smaller than both the iPad 9 and iPad Air 4, and even slightly smaller than the Galaxy Tab A7, and it is also the lightest of them all, weighing only 293 grams. As for the thickness, it is elegantly slim 6.3 mm, which is easy to carry in one hand, unlike other devices that are cumbersome to carry for a long time.

Apple changed the placement of the buttons on the new iPad mini, moving the volume control buttons on the top edge from the right edge in the previous version. The reason for this is the new Apple Pencil that rests along the right edge without leaving any room for buttons on that edge, as the pen is magnetically attached to power wirelessly via a small charger on that edge. But as Apple has taught us, you won’t get the stylus in the phone box, and you’ll have to pay extra to buy a separate one.

Apple has ditched the circular “Home” button that has long been a mainstay of the iPad, and replaced it with a power button that houses the Touch ID sensor that enables users to lock their device using their fingerprint.

the screen
The new iPad mini’s 8.3-inch screen ensures good picture quality suitable for viewing content, but it’s not OLED and doesn’t even use backlight technology using Mini LEDs, so it’s a significant decline compared to the screens of more expensive iPads.

performance and camera
Apple has equipped the iPad Mini 6 with the same A15 chip as the iPhone 13, which is undoubtedly the most powerful chipset ever offered to the iPhone, and more powerful than any chip that was supplied with an Android phone or tablet. Although the A15 chip is fast, it’s not quite the same as the M1 chip that powers the iPad Pro, but it’s more than capable of performing all the tasks you demand seamlessly.

You can be sure of the strength of the A15 chip by looking at the numbers it achieved in the performance tests, as it scored 4,700 points in the Geekbench 5 platform test, which is almost the same number recorded by the iPhone 13 operating with the same chip, a number much better than the 2,680 recorded by the iPad mini 2019. Compared to Android phones, the Galaxy S21, which is powered by the Snapdragon 888 processor, scored about 3,600 points.

Despite the power that the A15 chip gave the new iPad, it was far from the iPad Pro, whose M1 chip scored about 7,300 points.

The phone is available with only two storage options, 64 and 256 GB. While 256 may seem sufficient for most users, it can limit other users compared to the 1TB capacity offered by the iPad Pro.

Speaking of performance, it can be said that the 12-megapixel rear camera is no more than an ordinary camera for taking regular photos, but it is not recommended to rely on it, especially if you own an iPhone.

As for the front camera, it is a wide-angle (122 degrees) with a resolution of 12 megapixels as well, which is very suitable for video calls, as Apple gave it the “Center Stage” feature that belongs to the iPad Pro, which uses image processing software to track your movement during video calls to ensure that you are always in the center of the picture .

the battery
The company stated that the iPad mini 6 battery lasts 10 hours when used to watch content using Wi-Fi and this is what the tests have shown, but the battery life decreases depending on the nature of the use of the device, as the battery life drops to 8 hours when performing tasks that require more processing power such as games or programs Augmented reality and video processing software.